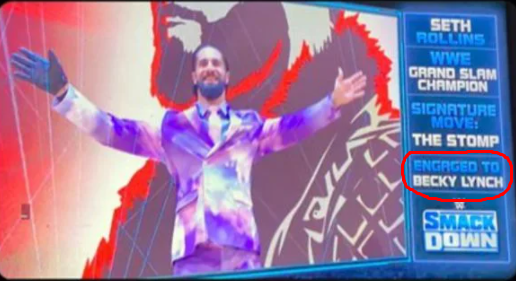 Five-time World Champion Seth Rollins was recently introduced as “engaged to Becky Lynch” in his graphic and his reaction was priceless.

Rollins has been showing up with drip lately and his latest public appearance saw him take to the ring to confront Cesaro in a standout tie-dyed purple and blue suit.

Despite the stand-out suit, it was the graphics used on Rollins’ entrance on SmackDown that caught the eye of many social media users.

She really is The Man! 💪🏻#SmackDown pic.twitter.com/CcqJtzZMof

Alongside the champion’s career so far, there was a cheeky addition to his accomplishments: “Engaged to Becky Lynch”.

Rollins is set to wed the former RAW Women’s Champion who is also the mother of his child.

Lynch has been off wrestling fans’ eye since May 11 last year when she sensationally relinquished her title and announced her pregnancy.

One fan tweeted a screenshot of the graphic with the caption, “They really put “engaged to Becky Lynch” as one of Seth Rollins’ career accomplishments. She really is The Man! 💪 #SmackDown”

Rollins, also known as “The Messiah” actually took some time to respond to the tweet as he emphasized that it was indeed an accomplishment to be engaged to a lady like Becky. 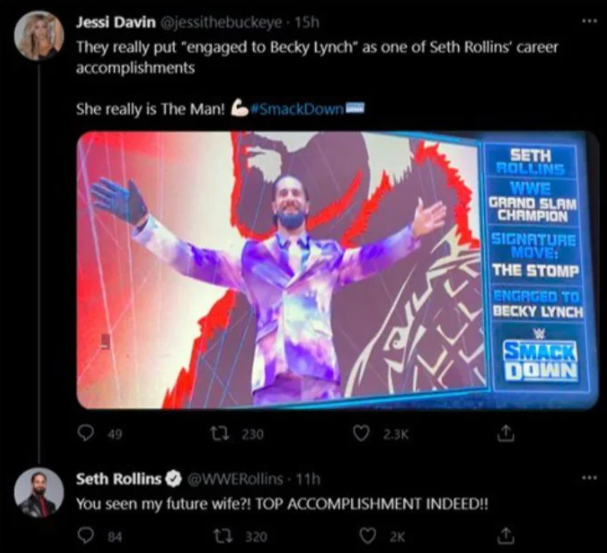 Rollins will face off with Cesaro on night one of WrestleMania 37 on April 10 at The Raymond James Stadium.

The two have had a feud which has been escalating in recent weeks and this has raised the stakes for the upcoming match.