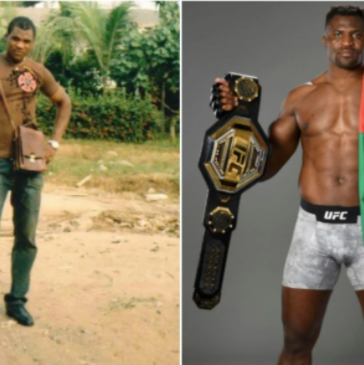 UFC heavyweight contender Francis Ngannou is no less than a global superstar at this point. The 33-year-old Nigerian has been hogging the spotlight for his vicious knockout victories and humble nature outside the cage.

However, Ngannou had to overcome a tidal wave of troubles to make it big in the UFC. Francis Ngannou had a troubled teenage, where he had to battle for survival.

A number of times, the UFC superstar has recalled the countless occasions in the past to explain how he struggled to earn money and fame throughout his career. His recent Instagram post was another walk down his troubled memory lane, where Francis Ngannou described how he spent two months in jail and how that moment changed his life.

It’s no wonder that Ngannou isn’t adverse to hard work – it’s all he’s known. From the age of 10, he was forced to dig at a local sand quarry just to provide for his single mother and his aunt, with whom he also lived with.

Other jobs, including a motorcycle taxi driver, were also part and parcel of Ngannou’s day in order to just get the basics, even going to school with no pens or even a bag.

Ngannou, however, had a dream. He decided to leave Cameroon to pursue a much more prosperous life and a new beginning. Sadly, there were many false starts before he could write his own story.

Making his way up to Algeria in northern Africa, Ngannou’s progress was halted no fewer than six times, continuously ending up back in the Sahara desert with nothing but animal-infested wells to drink from.

After finally reaching the promised land of Europe, Ngannou was jailed for illegally crossing the Morocco-Spain border by sea.

Once he was released after two months of being locked up, Ngannou fled to France. He had gotten so far, but without any real progress as he had no way of supporting himself. Having no money meant he was subject to sleeping on the streets of Paris, dreaming of a fighting career.

His work at the quarry from an early age and an imposing 6ft 4in frame meant Ngannou already had all the strength and all the tools at his disposal to be successful. After being picked by Didier Carmot, Ngannou was allowed to train for free as Carmot supported him with accommodation and food in the French capital.

Initially wanting to be a boxer, Ngannou began training as an MMA fighter, before his fist fight took place in November 2013. The rest, as they say, is history.

Eventually landing himself a UFC contract in 2015, Ngannou has gone from strength to strength. His first fight in the business was a sign of things to come as he emphatically knocked out Luis Henrique.

His rise to heavyweight champion may seem meteoric; in reality it has been anything but.

Ngannou has suffered a huge amount of turmoil and setbacks on his journey, making victory for himself and the people of Cameroon even more sweet as he inspires a new generation of African fighters.

He hasn’t forgotten his roots either. ‘The Francis Ngannou Foundation’ has been set up back in his homeland, providing young people with the facilities and opportunities he was starved of when he was young. He even gets his hands dirty by helping out at the same sand quarry from time to time.