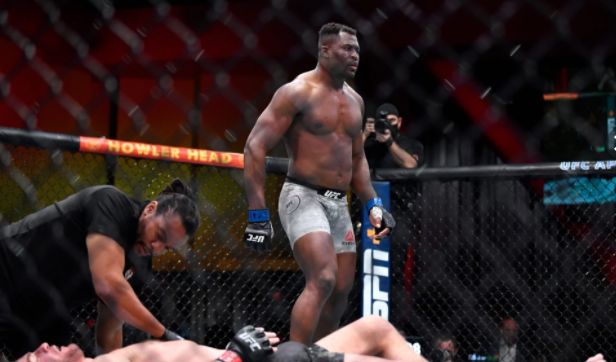 Francis Ngannou’s story is one which will inspire generations years to come.

The UFC Heavyweight boxer had nothing but a dream when he moved from Cameroon to France back in 2013.

Months after moving to France, he was introduced to the interesting world of Mixed Martial Arts.

From then, it didn’t take long for him to rise to the most competitive level of the brutal sport of boxing.

His steady progress has seen him crowned the Heavyweight Champion of the world back on Saturday, March 27.

The Cameroon native completely obliterated Stipe Miocic in Las Vegas in what was a sweet vengeance to the defeat he suffered at the hands of the American back in 2018.

In all honesty, it was one of the most brutal knockouts we will see this year, and it’s only March.

Ngannou possesses quite some impressive power, and his rival Miocic has to be given some credit for sustaining the bout for so long on Saturday.

The 34-year old now has his sights on Jon Jones, who vacated his lightweight title to move up to heavyweight.

If the bout ever comes to pass, it will be a battle between the greatest fighter in UFC history against the man with the most dangerous punch in the sport.

Jones took to Twitter after Ngannou’s heroics to hint at a possible bout by simply saying “Show me the money.”