It is all so awkward now 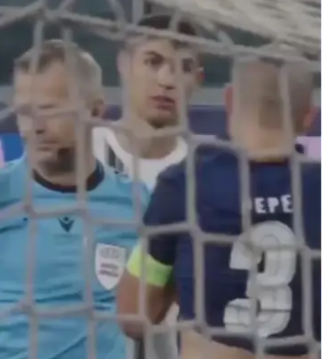 Juventus vs FC Porto turned out to be a nightmare for Cristiano Ronaldo as the Portuguese forward once again failed to deliver The Old Lady to glory in Europe’s elite competition.

Exit from the Champions League inevitably led to some serious speculation about Cristiano’s future at Juventus, one year to the end of his contract.

One sub plot about the match was the fact that Cristiano met with his old team mate Pepe, who now plays for Porto.

New, never-seen-before footage of the game showed an interesting exchange between Ronaldo and Pepe, just after Porto knocked Juventus out of the Champions League.

The Portuguese defender clearly needed medical attention as Juventus prepared for a corner but Ronaldo, being the elite footballer he is, seemed to urge him on.

“Carry on playing,” Ronaldo said as he shook Pepe’s hand as he left the pitch.

Pepe was able to continue with the game and it was his side who eventually carried the day, thanks to a free kick in extra time which set up a quarter final clash with Chelsea.